One of the most decorated builders on Roblox must be Asimo3089 and he’s received so much recognition for his builds that he even now has his own official Roblox toy in the Series 1.

Asimo3089 is a Roblox game developer and builder who has worked on multiple games over the years however two of his most well-known builds must be “The Wind” and “Roadrunner Canyon” which both won awards. Asimo3089 has also won multiple individual awards such as “Builder of the Year”. His games have been highly successful and although his content isn’t quite as popular these days as it used to be, he is still well known in the community and is highly respected by many members of staff at Roblox. So much so that he even won an award for that, as he picked up the “Staff Pick of 2013” award thanks to his games. His biggest game to date however is Jailbreak which is currently, by far the most popular game on Roblox, dominating rival prison games, Prison Life and Redwood Prison.

It can’t get much better than this for a game developer, having a great reputation within the Roblox community with players and staff, winning multiple awards and even getting his very own Roblox toy.

The items that he is seen wearing is the ‘Crook’ package that can be bought on the Roblox store. He also wears an expensive hat called the ‘Timeless Top Hat’ which looks quite a bit different in game than on the figure. The shades he is seen wearing are the Ice Cold Stunnas which are unobtainable glasses that used to be sold by Roblox. As for his cane, it’s just a generic cane you can buy from the catalog.

If you acquire this toy you will also receive an in game equivalent of his cane but slightly different.

Note from the creators:

Looking dapper is his specialty, but building Roblox games and experiences is his true calling. Over his 8-year career on Roblox, asimo3089 and his creations, “The Wind” and “Roadrunner Canyon” won several awards, including “Builder of the Year,” “Staff Pick of 2013,” and “Best Looking Place of 2013,” respectively. His showcases are a sight to see! 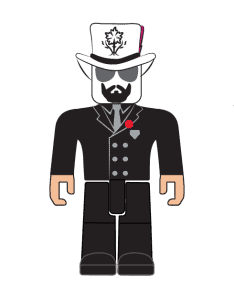 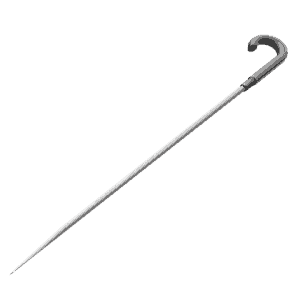