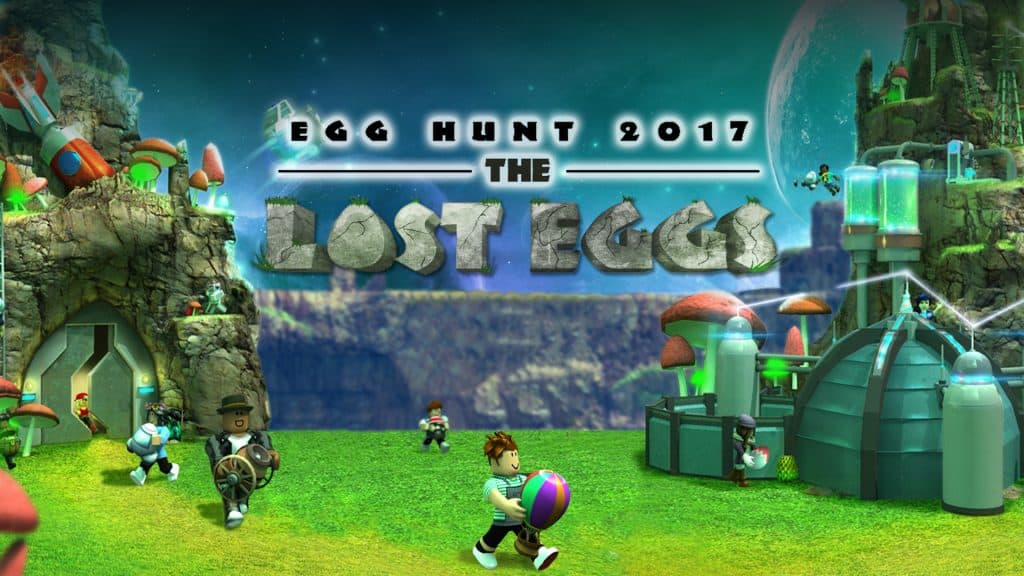 Roblox hosts many events every year for different real-life and custom events however, none of them are as big and important as Roblox’s annual Easter event! It is by far the most community-supported event every year, even beating the Christmas and Halloween events. Every year, Roblox make their Easter event, some years lacking in content such as 2015 while other years like the 2016 event having plenty of content to suffice the month. It is a time where Roblox dedicate all effort into making an enjoyable and puzzling game that awards some of the greatest hats on Roblox. Not only are these some of the coolest items in the game but they are also free! In this review, I will be rating the Egg Hunt compared to all the other Egg Hunts I have played during my time on Roblox.

I’m going to be rating this game unlike any of the other games I have reviewed so far because of how much there is to cover and there isn’t many statistics to be mentioned about it.

To start off with this review, I’m going to rate it in size. I would have to give this a stunning 9.5/10 in game size because trust me, this world is HUGE! There are currently 8 diverse maps to play in and obtain eggs. These include the Stratosphere Outpost, Shrine of the Eggs, World of Tomorrow, Northern Antarctica, The Timeless Desert, Mount Ignis, Arctic Battlegrounds and the Abyssal Plain. Spread amongst these worlds is an outstanding 43 eggs to be obtained with them becoming equipable hats. Not only are these maps gigantic and unique but they are filled to the brim with challenges, quests and puzzles to obtain eggs. They also have some of the best graphics in Roblox games to date! These maps and this game just seem perfect.

Stratosphere Outpost is a floating island town with 5 different eggs to obtain: Humpty Dumpty, Lost in Transit Egg, S.S. Egg – The Mighty Dirigible, Top of the World Egg and The Eggteen-Twelve Overture. This map has a mix of traditional and modern technology. With wooden inns, secret caves, hot-air balloons, clocktowers and more, it really is the perfect bland of culture. There is also The Tutorial Egg however it doesn’t really count because you can’t equip it.

Next up is the World of Tomorrow, going from old-fashioned, straight into the future. The World of Tomorrow is quite litteraly, the future, with modernised, electrical technology in a unique, marshy planet. There are 7 unique eggs to be obtained in this map: Close Eggcounters, The Answer Egg, Tesla Egg, The Eggverse, Faster than Light Egg, Martian Egghunter and EGG9000. With a futuristic theme, as you can imagine, all the eggs include space, robots and futuristic technology. This planet is full of mushrooms however a mad professor seems to have built tesla-rays, all around the landscape.

Next, we have Mount Ignis, a world that seems to be a mix of modern technology and Roman culture. This is just a guess but this map seems to be themed after Mount Vesuvius, a volcano that erupted and destroyed a Roman town, a bit of history for you! It’s just a guess but it seems accurate due to the Roman roads and buildings. This map is horrible, but in a clever way. The map is fun but it looks terrible… in conditions, the towns and buildings are destroyed by the destruction left by the volcano and while it doesn’t make for a very nice-looking town, it makes everything much more epic. This map has 7 eggs to collect: The Obsidian Egg, Pompeiian Egg, Egg-Bit, Eggcano, Ruby Egg, The Amber Egg and Unstable Egg. In my opinion, this map has the best eggs due to the uniqueness in the eggs and how great some of them are designed.

Next up we go to quite literally, the polar-opposite of Mount Ignis, Northern Antarctica. Unlike Mount Ignis, this map is both beautiful and quite relaxing due to the calming music and nature of it… UNLESS SOMEONE IS BLOWING THAT DAMN SHIP HORN! Northern Antarctica is quite how you’d expect, it is a mountain landscape full of valleys covered in snow and ice. There are penguins, seals, snowmen and avalanches! I think this is probably my favourite map, just because I love snow and found it very calming to play this map, despite how irritating the ship-horn is which seems to be signalled every few seconds! There are 6 eggs to be collected in Northern Antarctica: Snowman Egg, Frostbitten Egg, Seal Egg, Eggvalanche, Pegguin and Peep-A-Boo Egg. This map sure is fun and full of little challenges however it was also the buggiest map at launch, unfortunately.

Again, we go to a map that could be considered the opposite of Northern Antarctica, we are now at The Timeless Desert. Out of all the challenging maps in this game, I would have to say that this map alongside the Abyssal Plain were the hardest and took me the longest to complete. I can’t say that I’m a huge fan of desert maps in video games but I really enjoyed this map. It is the first map that you visit once leaving Stratosphere Outpost and it was where I collected my first egg. This map has 7 eggs to collect: Eggdress of the Chief, Sand Shark Egg, The Sands of Time, Mummy Egg, Dust Deviled Egg, Egg of Ra and Eggtus. This map seems to have a very Egyptian theme to it, as would be expected from a desert map. It is full of hidden temples, puzzles and timed trials. This map seems to be very centred around teamwork. It has some of the most challenging eggs but also some of the coolest eggs.

Now we have the smallest and most pointless map in the game, the Arctic Battlegrounds. To be honest, it feels like just an expansion of the Northern Antarctica map but with PvP (Player vs Player) enabled. The goal of this map is to kill as many enemies as possible. It is a team deathmatch, the Red Team vs the Blue Team. Unfortunately, there is only one egg to be obtained here, the SnowballSpheroid. I’m honestly quite disappointed in this map, not because I expected more but because I wish they done more with it. The map is amazing, in fact it’s my favourite map design-wise, even more so than Northern Antarctica. I love snow and I love the night and so this map is the perfect place for me. It’s a large snowy valley, covered in darkness with snow falling. It’s just so cool! And just imagine if they did add more eggs here, how cool would it be to fight against other players over eggs. To be quite honest, it’s something I’ve wanted for ages in Egg Hunts, there are so many players I’ve just wanted to kill while egg hunting because of them getting in my way and it’d have been so cool if they would have added some more eggs to fight over. Either way, this map was brilliantly designed and I so wish that they’d have done more with it, instead of it being over and done with after gaining 8 eliminations.

It’s time to go under the sea to visit our next map, the Abyssal Plain. I love and hate this map! I would have to say that this is the hardest map in general. Just like The Timeless Desert, this map is heavily themed around teamwork. The map consists of a large ocean full of mermaids, giant fish, pirates and scary depths. Unlike the rest of the maps however, there is a constant death cursing all players, oxygen. Yeah, that’s right, not only do you have to complete challenging eggs but you also must face a ticking bomb called oxygen. I love this map and hate it. There are 7 eggs to be obtained here: The Pirate Egg, Aqua Pal of Egglantis, The Eggtopus, Lumineggscence, The Pearl, Treasure Eggland and The Abyssal Egg. Again, I think this map has some of the coolest eggs of all.

The Shrine of the Eggs

Now we go to the final map, although, it isn’t technically a map. The Shrine of the Eggs has one egg to be obtained, The FabergEgg. The map is a dark, shrouded shrine with a tree in the centre of it. To conquer the darkness and save the world you must combine all your eggs into the worst egg Roblox have ever created… the FabergEgg. I hate this egg as you can tell.

As well as the eggs from these maps you can obtain the Roblox Egg from a Roblox Admin or certain developers and the EBR Egg by completing a series of riddles starting from Stratosphere Outpost.

Compared to the other Egg Hunts, I’d rate this year’s a hefty 7.5/10, with 2016’s Egg Hunt being a 7/10, 2015’s Egg Hunt being a miserable 4/10 and 2014’s Egg Hunt being an outstanding 8/10. Graphics and egg-wise I rate this year’s the highest due to it having the most eggs, some of the coolest eggs and the best graphics and maps however, there are a few reasons I didn’t rate it as the highest. Unfortunately, once you obtain all the basic eggs this year, there is no reason to continue playing throughout the month. Unlike the other Egg Hunts, this year’s Egg Hunt has no Fabergé eggs aka the super-rare eggs that can spawn at any moment, anywhere and not many players have. Once you finish this year’s eggs, your done and there is absolutely no incentive to continue playing. This is the main reason that this year’s egg hunt is being held back in ratings. I finished it within 5 days without using any guides or cheating however, considering that a lot of Roblox’s fanbase are young children, they would need to use guides for a few of the eggs, especially the challenging ones like the Amber Egg and especially with the EBR Egg. I know some people who used guides and all cheats that they could and completed the game within 2-3 days.

There’s also the bunny ears problem, where players have a -MASSIVE- advantage if they spend $25 ROBUX on buying an item that heavily increases their speed and jump height. I think these bunny ears are great because not only do they share a unique model with some super rare and expensive items but they are also cheap, but it also places a major handicap on free-to-play players. I personally think this should have either been default in the game or an item that could be obtained by completing a certain in game challenge but hey, Roblox must make some extra money somehow and at least they didn’t completely overprice it like with most event items.

Alright, that’s all for the review of this year’s Egg Hunt and it was a massive review. If you managed to read all of that… excellent job, and congratulations, you win the unofficial BloxReview Egg!