The Champions of Roblox set is a combination of six separate Roblox toys in one large package. These toys being knights, etc representing the different medieval kingdoms which Roblox base a lot of their items and event games after. The kingdoms include the Korblox, Overseer, Redcliff and Alar. The Korblox and Overseer kingdoms are usually depicted as quite evil whereas the Alar and Redcliff kingdoms are more neutral. Over the years we’ve seen these kingdoms/clans referenced in many different items, with them becoming a common and reoccurring theme. You’ll probably even find that a lot of players have even got loyalties to a specific kingdom. It’s fair to assume that Roblox wouldn’t have expected these groups to become as popular as they are today.

Most of these characters and their armour can be bought on the Roblox catalog however they tend to go for a lot of Robux/money, especially the Korblox and Overseer ones. To give you an example of how pricey these can be, the Overseer Eye fetches for a hefty $15,500 and the armour itself costs $2000. Meanwhile, the Korblox Deathspeaker is $17,000 however the Korblox Mage is only a mere $750. The Alar Knight of Splintered Skies is a decent $1,150 and the Redcliff Elite Commander is $2000. And finally, the Korblox General sells for a neutral $2000. (Note that these prices are in Robux and not actual, real-life currencies). As you can tell, these are quite the fortunes to purchase, however, one thing to note before purchasing these is that not these come with hats, the Overseer Armour, Korblox General and Korblox Mage, all don’t come with hats. The weapons as seen equipped by the toys are also not featured with the catalogue packages.

The catastrophic Korblox war against the Redcliff Kingdom rages on. Gather your forces and prepare for battle.

Korblox Deathspeaker
The all-powerful Deathspeaker strikes fear and utter terror into his foes. He uses his ancient staff to cast dark magic.

Korblox Mage
His powerful dark magic cannot be contained. It pulses through him, stronger than his own blood.

Korblox General
This fierce fighter carries a sword into battle, ready to strike at a moment’s notice.

The Overseer
With their all-seeing eye, the Overseers of the Korblox Empire are said to predict the future.

Redcliff Elite Commander
The Commanders lead the elite legions of knights in their grand quest to rid Roblox of all evil.

Alar Knight of Splintered Skies
These virtuous knights descend upon the earthen plane to undo the evil plaguing it. 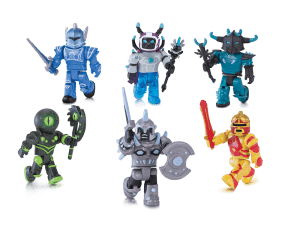 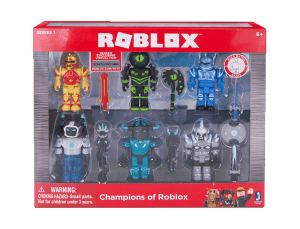